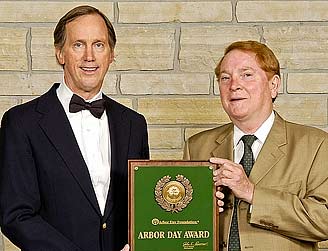 One of two Good Steward Awards went to Charles D. Williams of Munfordville, Ky. The award recognizes landowners who practice sustainability on private lands from which others can learn.

Williams is known around Munfordville as "the Tree Man," and he has lived up to his nickname by planting thousands of trees since he was 15. As a young man, Williams and a neighbor sold redbud and dogwood trees all over town. Today, residents are treated to a spectacular show of blossoms each year in April thanks to his handiwork. He has planted trees on his 929-acre tree farm every Good Friday since 1976. He was Kentucky's nominee for National Tree Farmer of the Year last year and has won several state and regional awards for the sustainable work he does on his farm. While serving as Munfordville's city attorney from 1993 until 2004, he started the community's Arbor Day program.

Raymond Plank and the Ucross Foundation

One of two Good Steward Awards went to Raymond Plank and the Ucross Foundation of Clearmont, Wyo. The award recognizes landowners who practice sustainability on private lands from which others can learn.

Plank founded the Ucross Foundation in 1981 to provide uninterrupted time, work space and accommodations to artists and authors in the wide open, arboreal landscape of northeast Wyoming. Thanks to the Foundation's stewardship of the land, the area's ecosystem has benefited and flourished. Ucross is located on a 20,000-acre working cattle ranch that offers artists a chance to let their creativity flow in a peaceful setting. Since it opened, more than 1,400 visual artists, writers and musicians have spent time at the ranch. They leave with a greater appreciation of the natural world and express it in their work for millions to see. The ranch practices long-term conservation initiatives: more than 15,000 trees and shrubs have been planted there. Ucross has also re-introduced native grasses to the area, and planted trees to enhance native wildlife, such as grouse, partridge, mule deer and antelope. The mission of the Foundation is to operate a successful ranch, inspire artists and improve the environment.