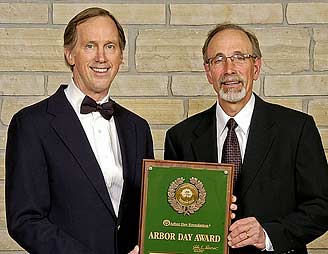 Mark Schnobrich of Hutchinson, Minn., was presented with the Lawrence Enersen Award, which is given to those who have had a positive impact on the environment through a lifelong commitment to tree-planting and conservation at a community level. Schnobrich was the city forester of Hutchinson, Minn., for more than 31 years before he retired on Dec. 31. During this time, Schnobrich turned Hutchinson into a forest on the prairie with tree-lined streets and healthy, stately elms towering over the community. Hutchinson has been a Tree City USA for 31 years due in large part to Schnobrich's leadership and commitment to its urban forest. He implemented a tree-planting program funded by the local utility company to strategically add trees on private property to shade air conditioners and windows and slow cold winter winds, reducing the city's energy usage. He also proactively worked with the University of Minnesota to train volunteers to conduct a tree survey to prepare the community for the threat of Emerald Ash Borer.