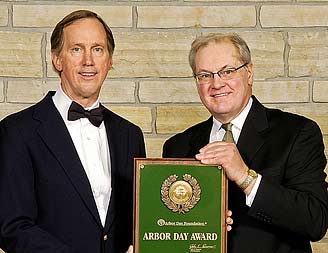 Mayor Todd Eberle of Prospect, Ky., received the Champion of Trees Award for advancing public forestry policy. Eberle has done more work for his community's urban forest during his first term than many public officials do in a lifetime. Since his election in 2007, Eberle has initiated a systematic approach to the city's forestry program. He worked with the city council to develop tree-care ordinances, established the Prospect Forestation Board, required the city to maintain all public trees and equipped his team with the latest arboricultural and urban forestry tools and techniques. By 2008, Prospect earned Tree City USA recognition for the first time, and has since received two Tree City USA Growth Awards for exceeding the program's standards. Prospect was also one of the first communities in Kentucky to implement a response plan to the invasive Emerald Ash Borer by using the latest computer software and recruiting an army of volunteers to assess the diversity of the city's trees.